While experimenting with battlecruiser designs the UCM initially developed the Atlantis as a testbed platform that used many shared components with the lighter crusier classes.  Following her successful deployment, High Command proceeded with the mass construction of the Johannesburg class which used a spaceframe built from the ground up.  Officially this was an economy measure, the purpose-built battlecruiser hull being "far cheaper to produce and easier to maintain" than the earlier Atlantis design. 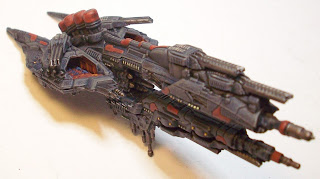 But that's not the whole truth.

What isn't widely known is the fact that the naval architects of the Atlantis project insisted that they could develop a refined version of their earlier project that would be no more expensive and far more efficient to produce.  Furthermore, by using as much existing equipment as possible the new ships could be put into production almost immediately.  By comparison the shipyard retooling required would result in a delay of at least half  a year before the first Johannesburgs were completed while also reducing the production of standard, light, and heavy cruiser hulls.

The new class, designated "Lemuria" by her designers, would share major structural components with the proven Moscow and Seattle designs.  Major modifications to the internal bracing and armor plating upped durability even further from the already-tough Moscow hull, but the biggest changes were found in her reactor cores.  These were modified to run on at a sustained 115% of their original rated load, with maximum emergency output as high as 150%.  To achieve this the designers added  massive array of armored coolant/radiator stacks to the rear hull, giving the Lemuria a unique and distinctive silhouette.  Other external changes included the addition of light railgun turrets above the "wing" hanger decks and modified prow wave guide/sensor arrays that made better use of her increased power reserves.

So, why didn't the Lemuria go into production?  UCM High Command rejected the design outright.  They claim computer modeling showed the class would be unacceptably vulnerable to severe damage, with the overloaded power systems likely to explosive failure.  The design staff insists their own results showed otherwise and the vessels would have been no more fragile than the Johannesburg (with all her new technology) has proven to be.   Some have even claimed political motivations behind the choice to go with Johannesburg class over the Lemuria, and some of the politicians involved have since come under suspicion of being involved with the PHR.  The full truth may never be known. 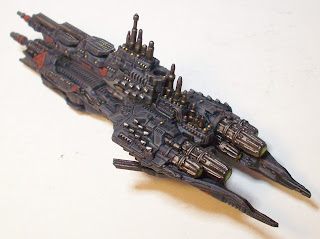 Or maybe Hawk would just rather sell resin models?  :) 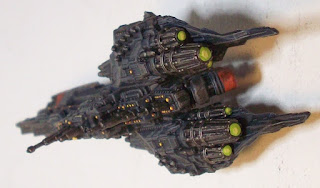 The Lemuria is a proxy design for those who don't have an Atlantis and who don't want to wait for the Johannesburg release.  It's a fairly obvious kitbash, essentially a standard Moscow build with Seattle wings subbed in and standard wing turrets added.  I've added some parts (the cooling stacks and prow spines) from the Hawk space station kit to make the model more unique, but a more minimalist kitbash could be done with nothing but parts from the cruiser sprues. 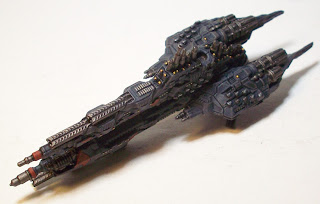