Showcasing a unit of ork killa kans today, all armed with big shootas to keep their point cost down in the cheap and cheerful range.  They feature a modest amount of kitbashing and quite few minor part swaps with other ork kits, particularly the deff dred thanks to its many cross-compatible components.  Or should that be kross-kompatible komponents?  Orkspeak is hard on the old spellchecker for sure.

Kans come on 60mm bases just like the larger deff dred does.  They may be the least expensive model in the game with such a large base, although some of the new Imperial Guard weapon teams may steal that title when their 9th edition codex finally arrives.  Being a 3-6 model unit on such large bases makes for some unusual problems when it comes to navigating terrain, complicated by having the vehicle keyword. 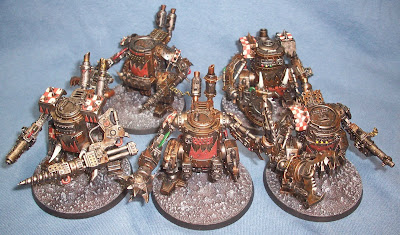 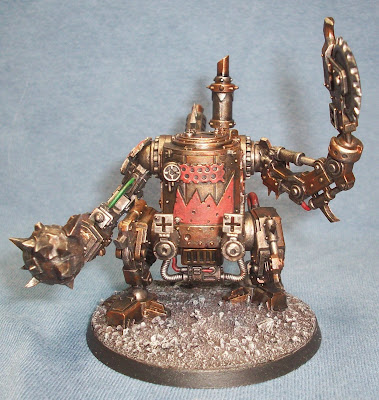 This one's been converted to have a pair of spare shoota barrels (which count as its big shoota) attached to its hull, a heavily-modified wrecking ball from an ork trukk kit attached to a power ram arm as its main melee weapon, and a second melee weapon arm (which does nothing in game terms but looks cool). 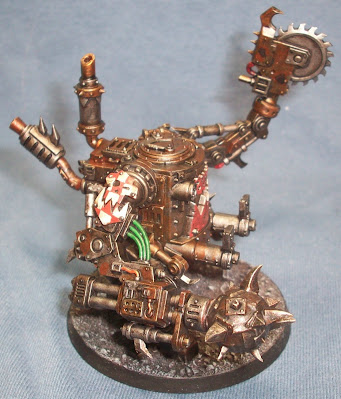 Kan units don't really have leaders as such, but that's no reason not to include a model that stands out from the mob a bit. 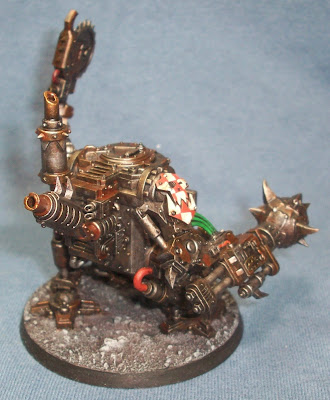 I'm sure some nitwit will irritate me by telling me it's not WYSIWYG sooner or later, but the folks I usually play 40K with aren't that kind of people - which is why I play with them. 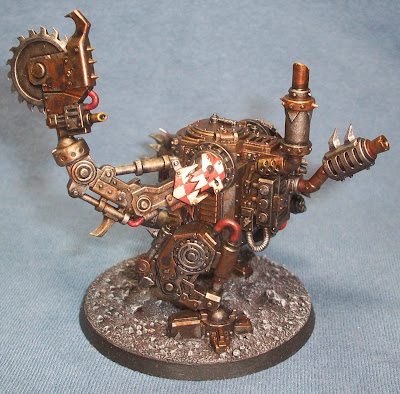 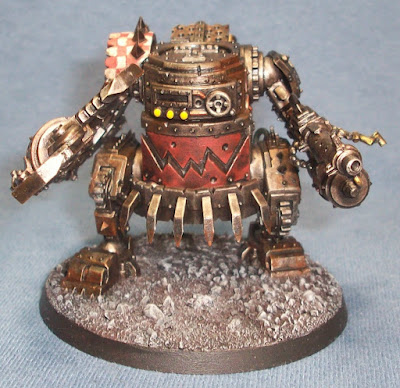 I think the big claw arm is a part swap from the ork deff dred kit, but I'm not 100% positive of that. 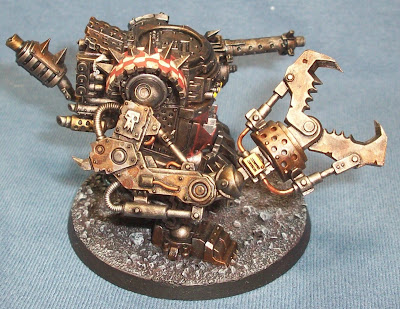 The empty casings spewing out of the big shoota come from the ork boyz kit, and can also be found in the burna/loota kit. 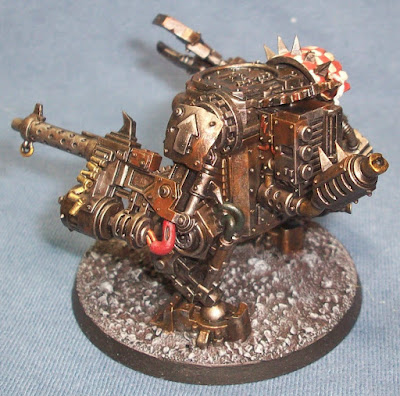 The "skirt" is just a piece from the kans kit stuck on upside down.  I like to think it's good for keeping over-affectionate (or hungry) squigs from jumping up on the kan. 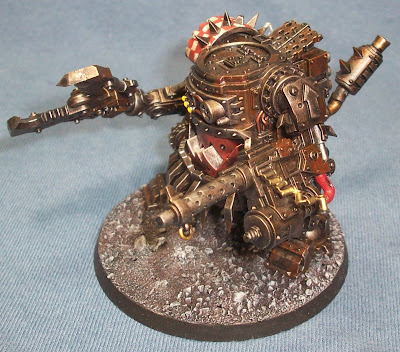 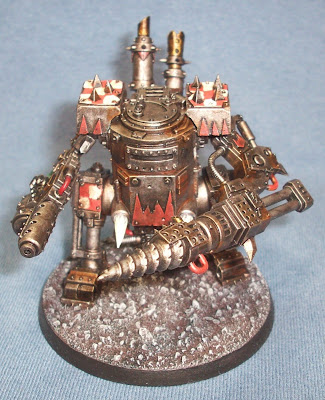 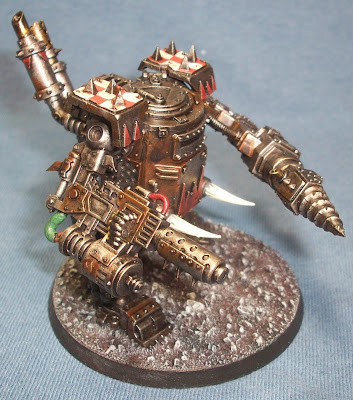 I did fiddle with the angle the exhausts a bit though. 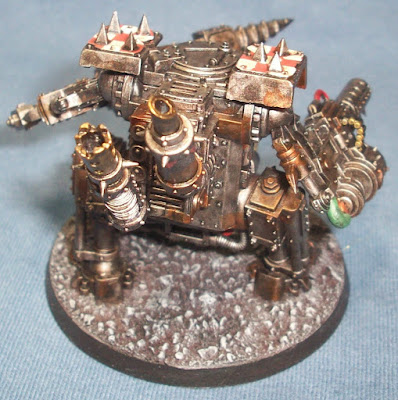 The original one has the long exhaust at a more vertical angle, which makes painting the engine detailing a bit of a pain because it runs so close. 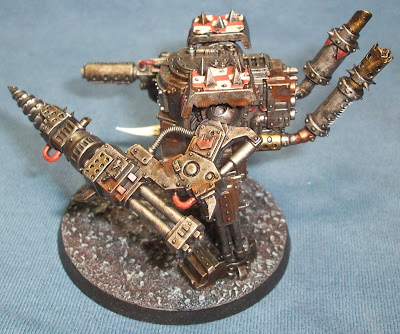 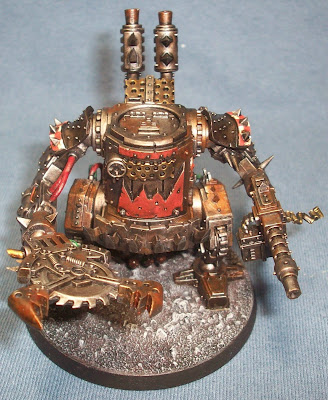 Because I couldn't think of something clever to call it, of course. 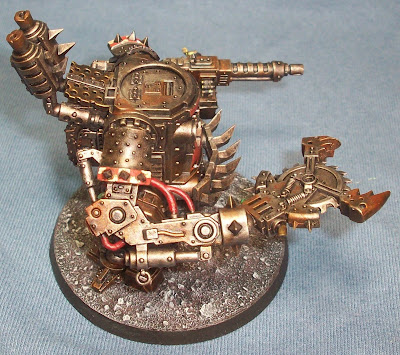 The big shoota on this one is heavily kitbashed, using the upper arm from the grotzooka piece, a gun from the deff dred kit, some scraps and bits to make it all hang together, and the same spent brass that Mister Pinchy used. 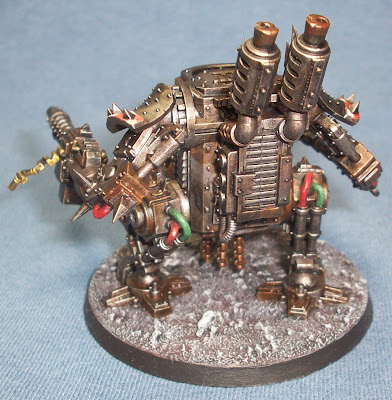 Pretty happy with the way it came out. 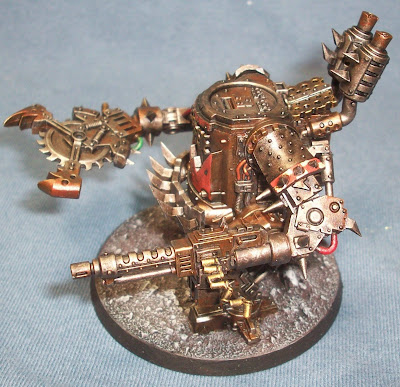 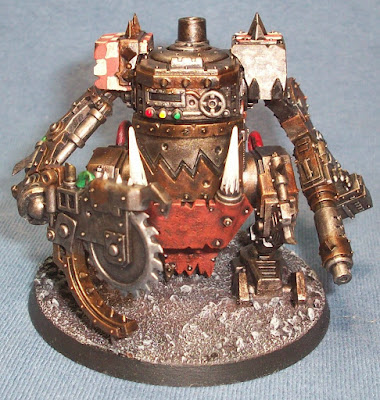 This one also uses a big shoota from the deff dred, which is an excellent source of spare weapons to round out the rather limited choices the kan kit comes with. 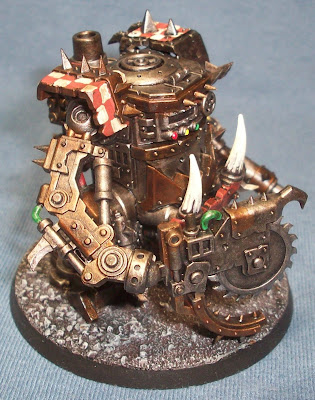 The deff dred also comes with two melee weapon arms designed to fit in its lower arm sockets, both of which are fully compatible with the kan kit and at least one of which is unique to the dredd, getting you variety if you use it on the kans instead.  You can swap can arms of any kind onto the dred's lower sockets, but they won't fit the upper ones, the shoulder ball is a different size despite the wrist socket fitting any of the many melee options between the two kits. 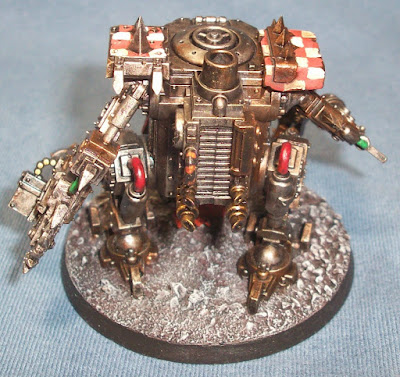 The big shoota here is another kitbash using the grotzooka upper arm, a buzzsaw from the ork nob kit, and some glyph plates to round it out.  The grotzooka weapon pieces are residing it the bits box awaiting use in a future project. 9th edition players will be quick to point out the numerous failings of killa kans, but they certainly are visually impressive models, and their low point cost (unless you start mounting the very expensive rokkit launchas on them) lets you field a unit or two without feeling like you've invested too much in them.  They come in groups of 3-6 and are boxed in threes, but I'm sticking with five-model units. That's partly to avoid giving Blast weapons a bonus, but the image below highlights a problem that I don't see mentioned by anyone - most likely because theoryhammer doesn't look at the physical miniatures much. 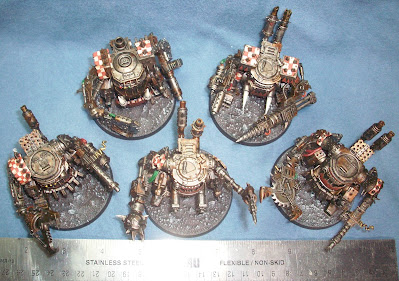 If you go to six models your unit coherency requirement changes from being near one other model to two.  Those big 60mm bases make maneuvering in tight quarters hard enough, and when you need to keep three figs in a clump it's even harder. Getting bottlenecked is a real possibility with a full unit of these thing, and can easily cost you the opportunity to charge the target you want.  Pundits are quick to point out how much morale losses in a kan unit hurt, but that's nothing compared to how bad you'll feel if you slip up and leave your unit in a position where you can't remove a casualty without breaking coherency, or worse, just plain lose a model due to careless movement.  Better to stick to five if you're taking them at all.
Posted by Dick McGee at 6:56 PM