A Wargames Illustrated a while back interview with Joe McCullough included a mention that he was going to be including more interactive terrain into his games in the future.  Many scenarios already have features that encourage (or even require) models to interact with them, but the idea of "generic" ones that can be included in the standard scenario listed on page 38 of the core book is quite a bit trickier to execute.  I'm taking a stab at making a couple here using some Reaper Bones stuff I'd painted up for an RPG.

Unless stated otherwise, models with the Animal trait cannot interact with terrain features. 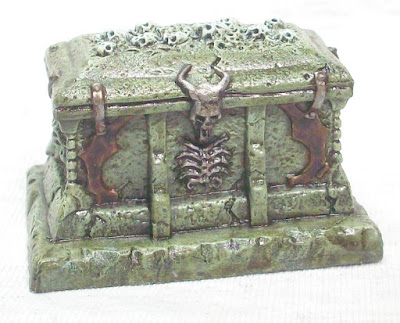 A sinister sarcophagus is placed in the center of the table and replaces the central treasure token.  Arrange the rest of the table so that all players' setup zones have roughly even access to the center, no one should be completely cut off by impassable or dangerous terrain. 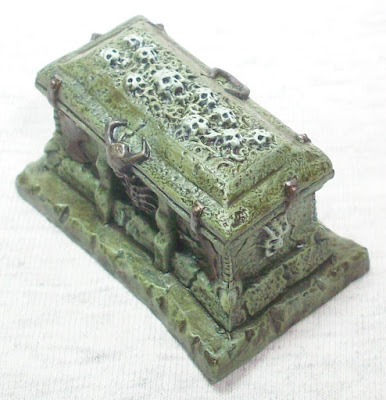 A model in contact with the sarcophagus may spend an action to attempt a TN15 Fight test to force the seals and remove the lid.  Alternately, they may attempt a TN12 Will test to find and open the concealed locking mechanisms to remove the lid, but if this test is failed the figure becomes poisoned by a trap.  Thieves and Treasure Hunters receive a +3 to Will rolls when trying to open the locks.
When opened by either method, the place the central treasure token on the sarcophagus, which can be picked up using the normal rules.  Then roll 1d20 and place the named creature (if any) in directly in contact with the figure that just opened the lid.
1-2:  Vampire.  This creature is starving after long imprisonment and starts with only 3 Health.
3-4:  Medium Construct
5-6:  Minor Demon
7-8:  Ghoul
9-10:  Armored Skeleton
11-12: Skeleton
13-18:  Nothing but dust remains, no creature appears.
19-20:  Medium Construct.  This creature temporarily joins the warband of the model that released it. 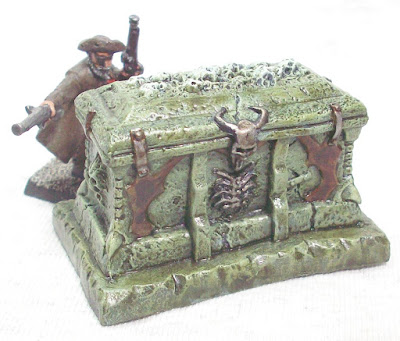 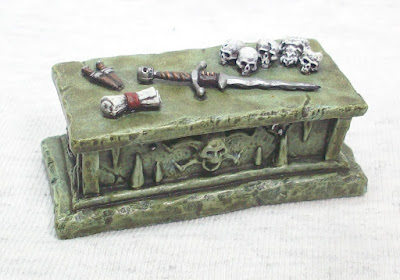 This terrain feature is placed in the center of the table and replaces the central treasure token.  Arrange the rest of the table so that all players' setup zones have roughly even access to the center, no one should be completely cut off by impassable or dangerous terrain. 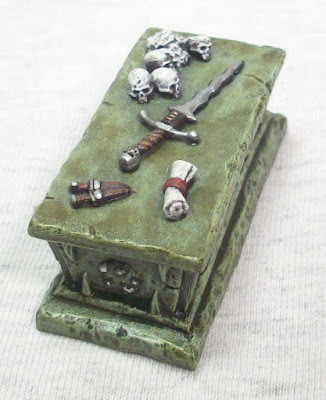 A model in contact with the mysterious altar may spend an action to invoke its forgotten gods for either a boon or a bane by passing a TN13 Will test.  If the model is carrying a magic item of any kind (including a potion or scroll) they may permanently remove it from their warband as an offering to the gods to automatically pass this test.  If the test is passed, then either:
1) A boon gives the model the central treasure token provided it can currently carry one (ie doesn't have a treasure already and isn't an animal) and an immediate 3" move (unmodified by carrying a treasure token) without using an action.
2) A bane allows the model to pick one enemy that it can see and make a +5 elemental magic attack against it.
If the Will test to invoke the gods is failed, the model immediately suffers a +5 elemental magic attack and its activation ends. 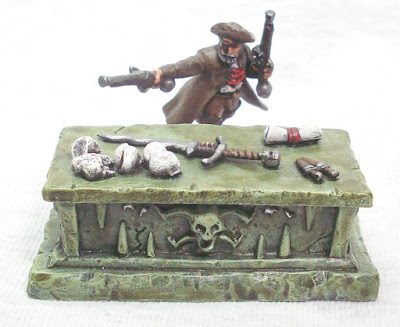 Not quite as tall but still good cover, and easier to move over if you want to.
Posted by Dick McGee at 6:01 AM