Another showcase for some GZG 15mm figs, this time a platoon strength force of Xar, which make excellent proxies for the Skitters from Falling Skies.  A relatively recent release, the infantry models are all two-piece models with separate torso and the (six) legs on integral bases.  The grav platforms are more elaborate, with seven parts on the standard build: central disc, two gun mounts, two guns, pilot lower body/legs, and pilot torso (which is the same as the infantry command pack).  The pilot legs are a tiny bit smaller than the foot version but still fully compatible with all of the torso options so there's a lot of potential variety.

EDIT:  I'm reliably informed (by Jon of GZG no less - doesn't get more reliable than that IME) that the pilot legs are the same size as the foot troopers, since they were made out of one with the integral base laboriously ground off.  The total diameter is just a noodge smaller to fit the disc properly but the size difference is mostly an optical illusion. 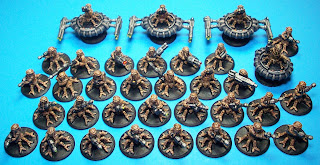 Two different types of heavy weapons, each with three poses. 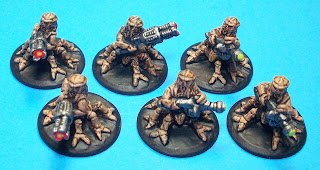 Two different gun teams, each with three models - although I think the missile (?) team comes with something other than the scanner/monocular fig here.

Command figure options include two different torsos with beam pistols, one "pointer" with beam rifle, and a scanner/commo gear fig. 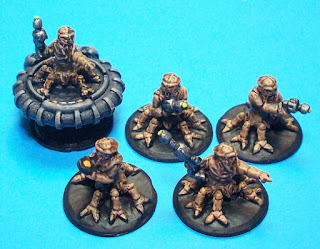 The command grav platform is a minor conversion using bits from a gun platform.  You can also use the basic disc by itself for unarmed platforms, and since the pilot leg bit is separate you could mount almost any 15mm fig on it if desired.  I expect to see a lot of these showing up in other armies. 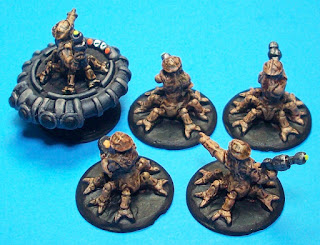 Assault gun platforms.  They come in packs of two with two each of the heavy weapons.  The catalog builds them with paired guns, but I prefer the asymmetry of mixed guns. 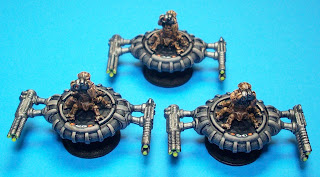 Oh, and the included bases are separate and have integral flight posts, so I guess that's technically eight parts. 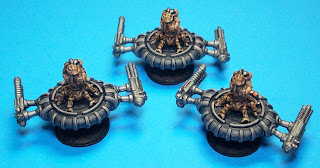