Working on using up some leftover bits, in this case kitbashing a couple of ork runtherds, seen here with a few of their grot mob.

The runtherd on the right is the official model from the grots box and has been finished for a while.  He's a nice enough fig and comes with several options for assembly, in this case a whip arm and a grot-prod.  However, the basic body is fairly distinctive and has no posing options, making him rather static.  Not something I wanted multiples of, so I've re-tasked at least one of those bodies as a regular boy. 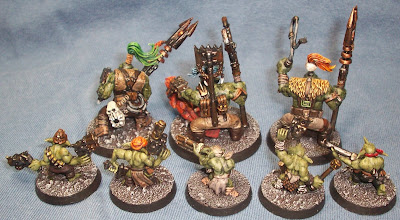 The spare parts from his assembly fit reasonably well on the boyz bodies, so I've used them and some other bits box stuff to make two variant runtherds. 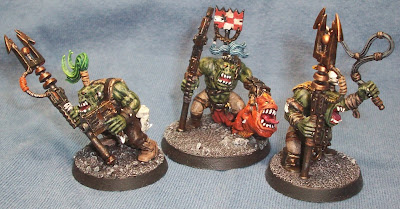 The gent on the left got a has another grot-prod, a whip coiled on his belt, and a drawn slugga. 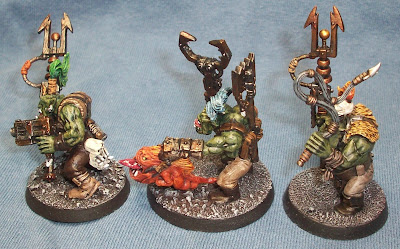 The guy in the middle has a grabba stikk, a squig-hound, and an added back banner.  Even on the actual squig-herd the fit on the squig hound arm leaves it hanging off a 32mm base, so I've upgraded to a 40mm base so there's more room for it.  The gameplay impact is tiny, and reduces my general annoyance at models that don't fit their official bases.  Stop doing that, GW. 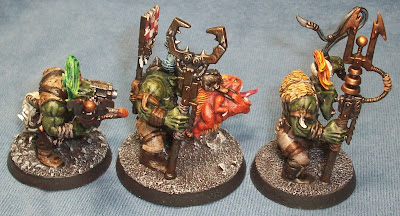 No one in their right mind needs three runtherds in any iteration of the rules, but I've been watching what GW is doing with the way they change dataslates to fit the box contents and I'm prepping for 10th edition to downgrade the herders to unit champion stats and tells us the grot mobs now require 1-3 runtherds and 10-30 grots, with a minimum of one runtherd per ten of the little guys.  It's exactly what they've been doing with other armies as they get new books, and follows the same irritating pattern the lootas and burna boyz do with their mandatory spannas.  If worse comes to worse and that doesn't happen they can proxy as boyz, but if/when it does at least I'll be prepared.
Posted by Dick McGee at 10:45 AM