Found a few more leftover parts from my Dropfleet Commander binge a few years back, so I've kitbashed another group of small warships for the Zedoss Monarchy fleet from the last few posts.  Hopefully this is the end of this project, I can't possibly have a another batch of misfiled bits, can I? 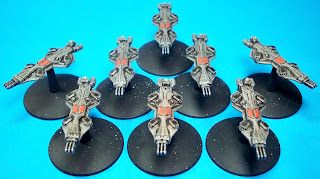 So, what have we got here?  These guys were a bit more difficult to stat up in Full Thrust due to the eight(!) missile launcher turrets (there are four more on the belly) on each of them.  Clearly can't jam that many salvo or medium tactical missiles on a destroyer-sized hull, and frankly I'm bored with doing disposable missile boats anyway, so I'm resorting to a rather iffy playtest weapon, the "rocket cannon" from over here:
http://fullthrust.star-ranger.com/CRstats.htm
Not sure I wouldn't make these things a little vulnerable to point defense, but maybe they're okay as-is.  They're not great against high-thrust ships (at least the ones using that thrust) and are pretty murderous against very slow ships, which makes them not so great against most other small ships - which I will use as a convenient excuse in the fluff for why they weren't in the original article.  Their late appearance has nothing to do with their main components being in a parts bin with some ancient Trinity Battleground models, no sir.
Rampart-class Missile Destroyer

The Rampart class is an older and somewhat outdated design that has been largely replaced by the Bulwark class close escorts and the Ranger class patrol ships.  They mount the same medium powered forward beam cannon as most smaller Zedoss warships, but their other armament consists of no less than eight turreted light hypervelocity missile launchers.  These weapons are fast-firing and can do significant damage, but lack range and have difficulty scoring solid hits on fast-moving targets.  More modern ships rely more on standard beam weapons and hard-hitting CAWS arrays instead.  The exigencies of the rise of the Monarchy and the subsequent Revolution have forced the fleet to call many of the old Ramparts back into service to help make up numbers in both Battle and Patrol Wings. 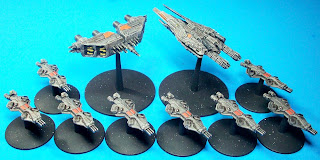