Recently finished a more whimsical project, a unit of Grymkin Mad Caps & a trio of Cask Imps from Privateer Press' Hordes range.  Behold, the Iron Kingdoms Intemperance Crusade.  Their motto:  Have a drink on us! 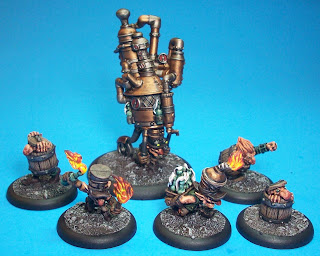 These models are a mix of metal (for the Molotov chuckers and the body of the Boss) and resin (for the Cask Imps and most of the mobile distillery itself).  Pretty clean castings as usual for Privateer Press, although there were quite a few biggish pour spouts on the still and assembling it definitely requires some careful examination of the 3D rotation on their catalog gallery. 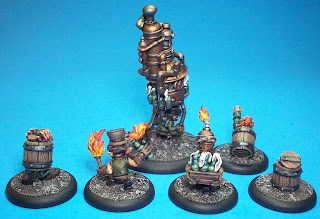 The small bases are the usual 30mm rounds, the Boss has a 50mm. 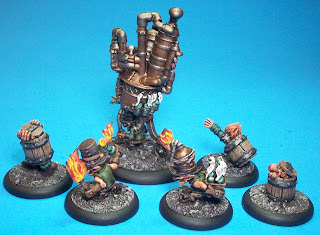 I love the concept ("drunken explosive pyromaniac louts") behind the models and the execution is well done, but I can also see why some Warmachine/Hordes/Iron Kingdom fans object to the Grymkin faction as a whole.  These models in particular look like they belong in Malifaux from Wyrd Games, not the Iron Kingdoms.  Painted with green skin, they'd be gremlin moonshiners, no question about it. 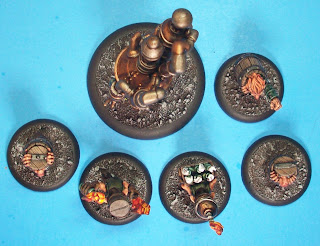 Mind you, Privateer has had plenty of other rather cartoony figs in the past, and they're also fond of seriously over-the-top weapons and armor so gritty realism isn't something they're known for.  Steampunk fantasy not realistic, who would have thought it? 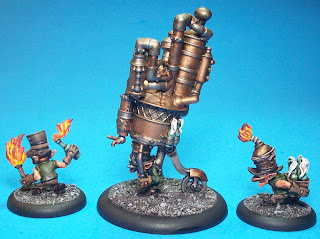 I could see these figs coming in handy for other settings and game systems.  They'd make a neat roleplaying game encounter and are practically perfect for the old GURPS Goblins rules.  Would work okay in a variety of steamtech and VSF fantasy skirmish rules.  And of course they could become "counts as" models in Malifaux, where their base sizes make them fit especially well. 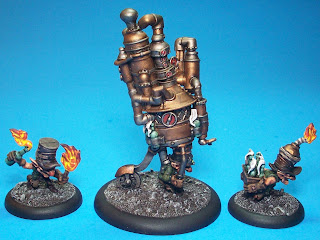