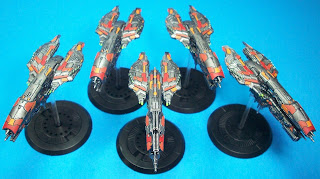 Pair of Osaka-class light cruisers, which is the minimum squadron size.

These were pretty good from word one, but got a huge boost in offensive power with the latest test errata. 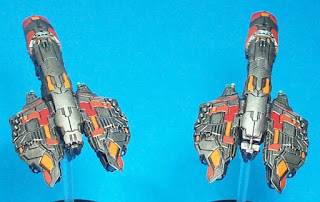 Lowered cost AND a free 1d6 extra shots just for firing two ships in the same group at one target.  Kind of nuts, even if they did get used a bit less than the other light cruiser class. 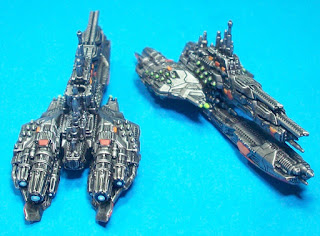 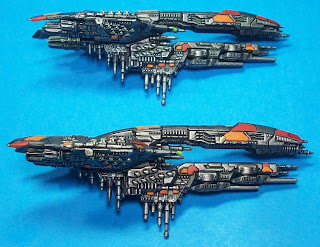 Speaking of the other light cruiser type, a pair of New Cairo-class ships.

Fast, pretty cheap, a stupidly huge spinal laser cannon that lights up targets for other ships, never needs to use Weapons Free orders. 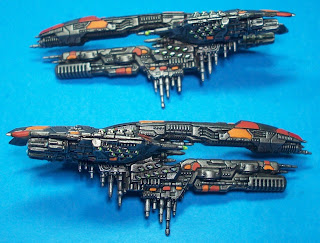 Must be doing something right, since it's never been touched by any errata. 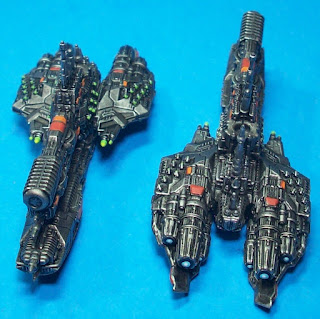 Oh hey, you ever notice how Hawk made this range of amazing modular plastic spaceship kits and then didn't write the rules to let you design your own stuff OR use all the possible parts combos for official designs?

Yeah, that sort of thing drives me crazy too. 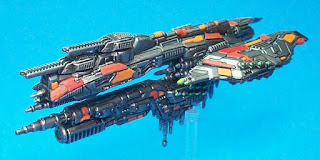 So here's a strike cruiser build - light cruiser wings without the cruddy secondary turrets the bigger cruisers are saddled with, heavy cruiser "top deck" so it can carry two main weapon options, and a mix of railgun turrets and a superlaser.

I like the way it looks, although I haven't settled on game stats yet.