Dropfleet Commander's plastic model kits are very modular and can be used to build at least 4-5 different ship classes each in game terms, which is nice but it also means you tend to wind up with quite a few leftover parts when you're done with a box.  Many of the individual pieces can be swapped around between ships types, and some parts can be inverted or attached at different angles than intended by the designers.  Today's gallery post examines a few of these kitbashes. 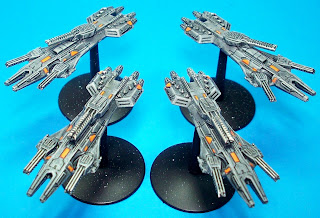 For example, these four ships started life as UCM Toulon "combat" frigates, but they've been tweaked quite a bit.  The central "spine" component has been left off entirely, and the standard turrets replaced with ones form the cruiser kit. 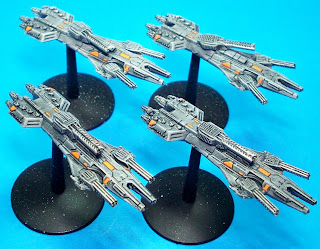 More importantly, the "fin" pieces with the side turret mounts have been reversed entirely, radically altering the ship's line and giving them a more threatening and less streamlined "nose-heavy" silhouette. 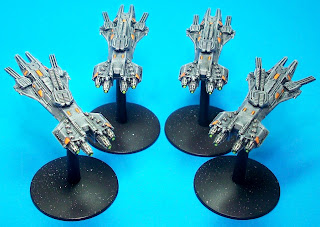 No cutting or filing is required for this kitbash, and they could be used as stock Toulon proxies since their weapons layout is still visually similar - although I do like the larger variant turrets. 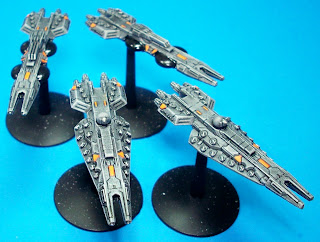 These four use pieces from the Jakarta escort frigate and Lima ECM frigate builds.  Once again the "spines" have been left off on all of them. 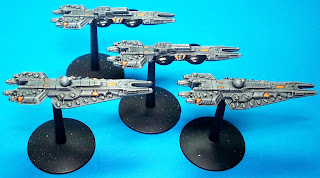 The Jakarta escorts have had their side "gun deck" fins installed upside down but in the normal "tapering toward the rear" orientation.  Their solitary railgun turret has been swapped out for a small ball turret from the DfC space station kit, which looks more like an escort's gun. 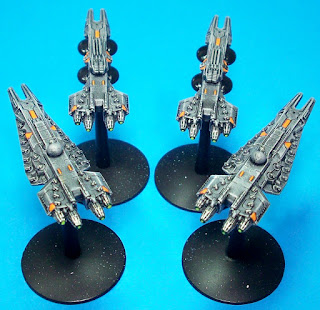 The Lima's are almost stock designs, albeit without the "spine" and with a cruiser turret swapped on in place of the usual gun.

As you can see, they have  a lot of belly detail that you'll never see on the tabletop. 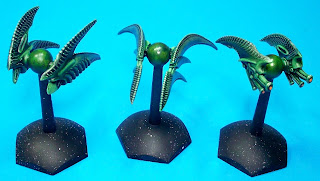 Scourge frigates wind up leaving you with rather a lot of different wing pieces, as do some of their cruiser builds.  They're too interesting bits to leave unused forever, and while there's a temptation to add them to other models I thought I'd take a stab at building them as ships in their own right. 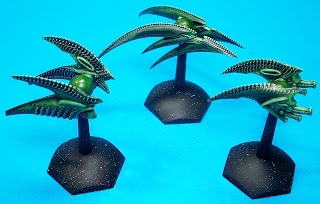 These three are pretty much proof of concept designs, using bits from a cruiser (center), a strike carrier (left), and an orbital bombardment frigate (right). 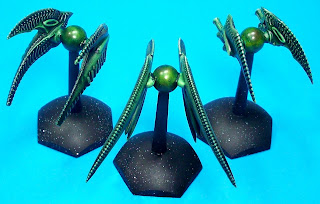 The center hub is a simple bead from a craft store.  The cruiser wings need a bit of filing to fit, while the frigate wings have ready-made sockets that are a ready fit. 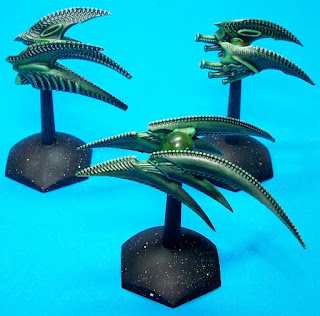 I quite like them as odd alien ships, although I may take a look for something more detailed as a hub next time I'm in the bead and cheapo jewelry aisle. 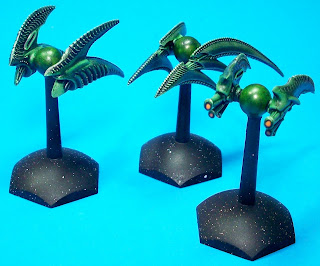 The bombard wings look the best, I think.  Haven't tried fiddling with the other wings available yet, but there are at least three other frigate styles and a very small variant for the cruisers (which is used for light cruiser builds). 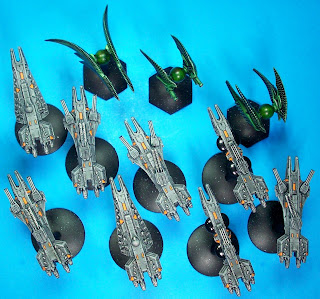