Battlefleet Gothic: Anathema Imperialis, A Ghost of Wars Past

Currently playing around with idea of using modified Battlefleet Gothic rules to game wars in the "grimdark" Warhammer 40,000 universe but set far earlier, back in the so-called "Age of Strife" era.  For those not up on their GW fluff (and I don't blame you if you're not, it's quite a revisionist mess continuity-wise) this was the lengthy time period where humanity's diverse interstellar civilizations gradually fell apart due to a number of factors, resulting in a general collapse that ended only with the rise of the Emperor and the Great Crusade somewhere around the 29th or 30th Millenium. 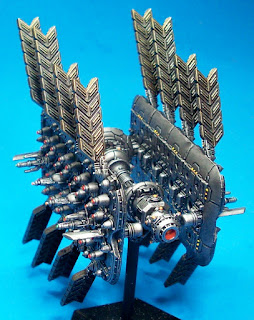 One of those factors was a widespread war against rogue Artificial Intelligences, remembered thousands of years later as the War of the Iron Men.  Humanity won that war at great cost, but there are very few details from the era and a lot of the canon openly contradicts itself.  So, plenty of room to add my own stuff.  Like this fine warship here. 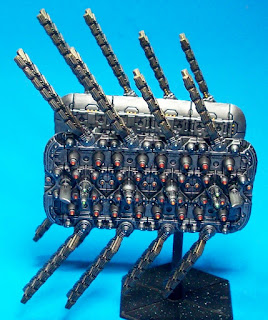 Roughly the equivalent of a 40th Millenium Imperial cruiser in terms of overall size and combat role, the ship is a good example of the kind of warship used by the hostile AIs that fought against humanity (and most organic life, really) during the 25th and 26th Millenium.  The vessel is operated entirely by a gestalt machine intelligence network and carries no living crew, and despite its great size has only a minimal capacity to transport organic life forms.  Even that exists primarily for holding prisoners for use as hostages, test subjects, and information sources. 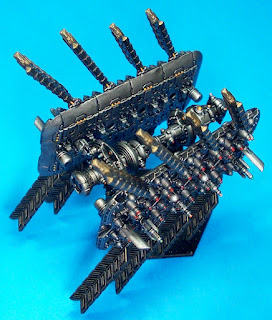 The ship features some design elements commonly seen in the Imperial navy, albeit in a form almost unrecognizable.  Its main weapon is a massive spinal katatron, an exotic weapon that hurls unstable energy vortices to prodigious ranges, something later emulated in much cruder form by Imperial nova cannons. 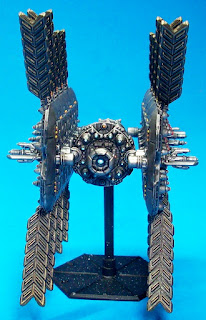 The katatron and main drive and power core are sandwiched between two armored wings which each carry a mass of secondary power generators and the ship's secondary broadside weaponry.  These broadsides include bank after bank of plasma cannon, megalaser emitters, and more specialized weapons such as resonance wave projectors and mass conversion beams. 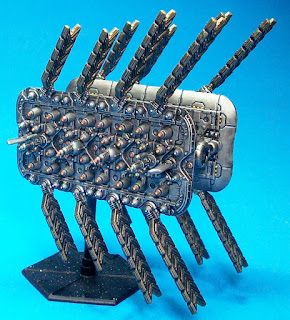 Like most rogue AI ships the design features a distinctive array of Gellar field manipulator fins, a vital part of its FTL drive system.  Lacking the use of organic Navigators the ship's ability to maneuver in the warp relies much more on brute force to power its way through any dimensional currents encountered, something possible only thanks to the incredibly advanced energy generation technology of the era.  The fins also double as shield emitters, maintaining a dizzying array of energy absorbtion and deflection fields around the vessel. 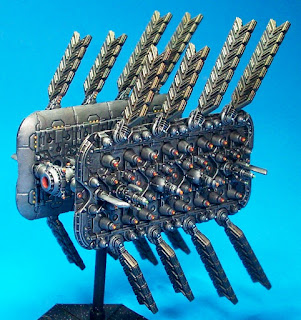 No exact accounting of AI fleet numbers was ever made, and there were many vessels unaccounted for when the wars against them finally died down.  At least a few were apparently lost in warp space, which was becoming increasingly turbulent during this era.  Many emerged much later in the Age of Strife,  with one being vaporized near the orbit of Saturn late in the 27th Millenium and another self-destructing after being cornered by a defense flotilla in what would someday become Interex territory. 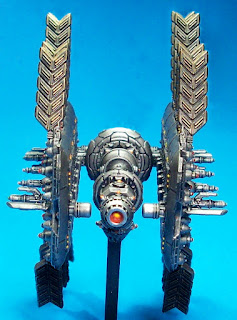 At least one (this one, in fact) remained lost far, far longer though.  The vessel here was dubbed the Anathema Imperialis (its "true name" is a lengthy string of binary code) when it was encountered by elements of the Battlefleet Gothic early in the 41st Millenium.  Its unexpected appearance and subsequent escape into interstellar space has sent the region's Adeptus Mechanicus into a frenzy of activity, but their exact goal remains unclear to outsiders.  Some factions certainly want the Anathema destroyed at all costs, as its "Abominable Intelligences" represent the worst techno-heresy imaginable.  Others may be more...flexible in their outlook, and rightly point out that it may represent the greatest find of STC data in millennia.  None seem to be questioning what desires the ship itself may have, or what measures it might take to resume the war against organic lifeforms its kind once pursued. 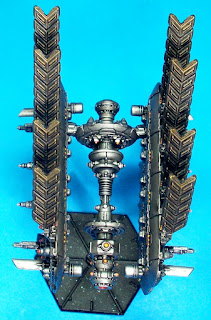 The model is built out of components from the Dropfleet Commander space station kit, and is something of a proof of concept design.  You can see (many) more conventional builds using this kit over here:
https://brokenstarsburningships.blogspot.com/2017/07/dropfleet-commander-space-sation-builds.html