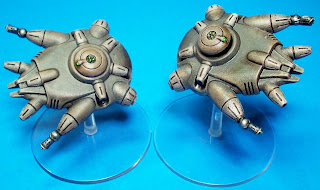 Todays project showcases a pair of kitbashed light freighters in the style of the Millenium Falcon - ie way faster and better armed than any honest tramp ought to be.  They're intended to be used with for roleplaying (Star Wars would be particularly appropriate), or for "up-scaled" Full Thrust or Starmada or the like.  At a stretch they'd work for ground combat games like Dirtside, although they're a bit small for 6mm - 2mm would work fine, though.

The model's main hull is an Asterian gun drone by Mantic Games, sans the big turret.  I've added a pair of ball-mount guns from Mantic's Asterian marionette box and the dorsal and ventral "saucers" are parts from the Dropfleet Commander space station kit. 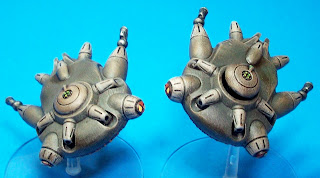 The station kit parts are a particularly neat fit, since they cover the holes the hull has for the usual gun perfectly and can be installed as-is for a raised turret (on the right below) or trimmed down for a "buttoned-up" version with the turrets retracted down flush with the hull (left, below). 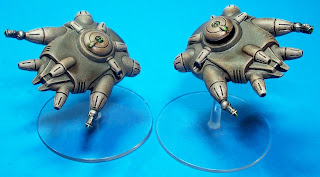 Since I didn't want to drill into the turrets I ran a mounting socket for the flight post in at an angle beside them, which gives them a nice dynamic swooping pose.  Might do another one at some point with the ship in "landed" mode, the little metallic balls (conceptually) being the retracted landing gear. 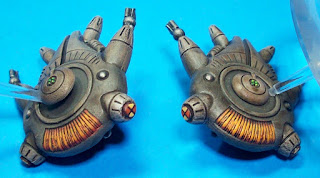 As you can see the main engine grill is on the ship's underside.  The rear "prongs" are intended to be the cargo loading doors, and are pretty small in 6mm-ish scale.  This is definitely more of a smuggler's ship hauling low-volume, high value cargo.  That category could easily include small units of infantry if you're a small-time mercenary or the piratical sort. 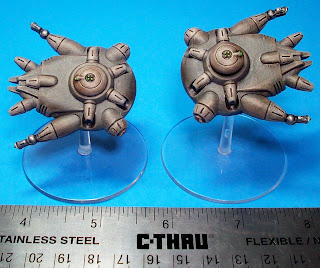