A few years back I did a showcase gallery of some starship terrain pieces:﻿


At the time I couldn't find images of all the "area" terrain I'd done for Battlefleet Gothic back in the early 2000's, which also got pressed into service in other rule sets.  Finally stumbled across them in an old file the other day so here's a follow up post.

I find "area" or "zone" terrain works best as flats, since most rule systems let ships enter and move through them.  3D terrain looks great, but it's impractical to balance ship minis on.  Hence all of these were made of thin plastic sheeting, about the same thickness as cereal box cardboard but much more durable and basically immune to getting wet.  They were cut into irregular shapes that roughly matched the range of sizes you could get with BFG's random terrain generator system﻿, and I made enough that we usually had a more-or-less exact match for whatever the dice rolled up.  Everything was heavily matte-coated after painting and held up for several years of play and transport without visible wear.
The gas/dust clouds were sponge-painted using three different color palettes.
The blue/purple/pink set was the most whimsical, and included the infamous Colon Nebula.  The brighter sides were usually aligned toward the "sunward" table edge, which made remembering what directions were slow or speedy for Eldar much easier. 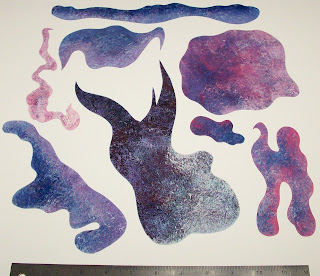 The red/orange/yellow set got used preferentially for fights in the inner system, nearer the local star. 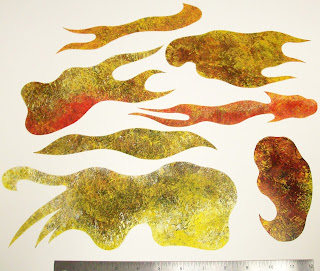 And the green/more green set included some of the most elaborate shapes.  They also got a bit of orange on some pieces to mark sunward, as well as to spice them up a bit.  Bit blander than I'd intended for these. 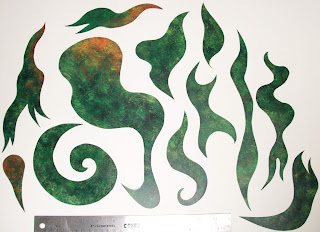 The asteroid fields were hand-painted, one rock at a time.  They're very simple paint schemes, if a bit time consuming.  Varying the size and shape and configurations of the asteroids helped make the shades-of-gray palette more interesting to look at. 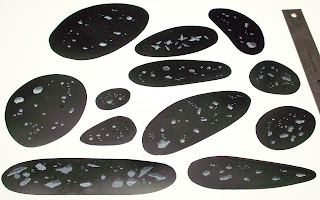 I made a point of doing a basic light/shadow effect on each piece so the rocks all share a uniform sunward side.  The templates for these were left rounded rather than the irregular gas clouds so it was a little easier to move without accidentally clipping, which is quite dangerous in BFG or Full Thrust. 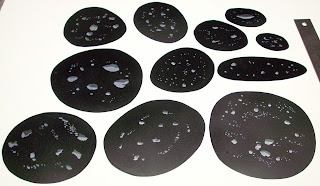 Only did a few warp rifts, which are rare results on the random charts.  They were sprayed silver, then the "wave front" of intruding warpspace was painted in by hand.  I deliberately left one edge flat in an attempt to make them as unnatural-looking as possible, although if I do more in the future I'll probably do a full "border" on fully-irregular shapes instead. 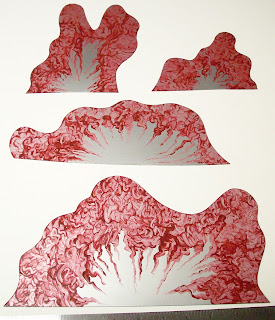 Long since sold these off, but seeing them again has me feeling an itch to try another set and see how I can improve on them with almost a decade's more experience.
Posted by Dick McGee at 6:08 AM