Today's post is a gallery of images from a recent commission job.  The minis came from RBJ Game Company's "Significant Seven" Kickstarter, and are (mostly) available on their store here:
http://store-rbjgc-com.3dcartstores.com/DWARVES_c_37.html

The KS project was basically re-imagined Snow White and the Seven Dwarves with a touch of the Seven Samurai/Magnificent Seven, all of whom also came with animal companions.  The gent with the bow and warpaint and his eagle companion were KS exclusives.

My painting brief was to emulate the sample figs on the KS page, albeit with trying the NMM effects (which I admit I'm not great at) they used.

This made color choices easy, although I did have to exert a little creativity on the back of the figs since every single image was front-angle-only.  The bases were to be left in plain neutral colors for the customer to mod later.

The KS only included nine animal companions, with the Christmas schnauzer having come from some other project.  RBJ seems to be very fond of schnauzers, and offer a variety of them on their store, including a skeletal version. 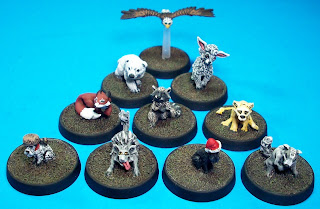 Overall, the models were extremely well cast and had a nice level of detail.  There was no flash at all and minimal mold line cleanup required.  Some of the Dwarves were cast in multiple parts (main body and a separate arm/weapon or two) but assembly was simple and all the join points were sensibly designed. 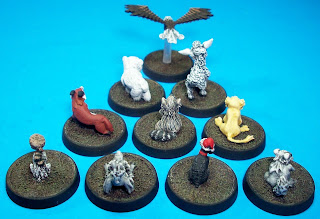 Very characterful group of minis, and extremely professional production work on them.  A definite A+ for RBJ Game Company, and it has me looking at their other figs as potential future purchases.
Posted by Dick McGee at 9:29 AM