After yesterday's big lot of Deisho ships and fighters
http://brokenstarsburningships.blogspot.com/2019/09/full-thrsut-cold-navy-deisho-heavy.html
today is prep day for some experimental projects.  The easiest of them is finished up, so I present you with a proof of concept kitbash inspired by some old QT Models figures. 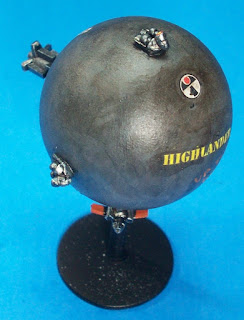 This is the "Highlander" scoop miner/gas transport, registry number SC/T-88D8, currently in colonial government service in the New Hoboken system.  Calling her a "ship" is pushing the definition pretty hard, as this type of scoop miner is mostly just a cruiser-sized armored cargo sphere meant for holding pressurized gas.  The control module and (unmanned) main drive are plugged into attachment sockets in the sphere and three attitude thrusters are molecularly bonded to the hull. 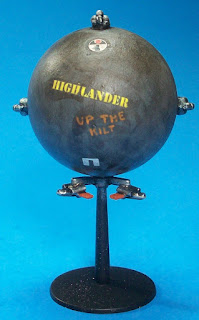 The control module has three docking arms for three winged shuttles designed to scoop material from the atmosphere of gas giants and return it to their mother "ship" to undergo initial filtering and processing, separating out valuable elements as well as fuel and reaction mass for use on the work site.  The module contains some minimal crew accommodations (only slightly better than the shuttles' own) and the pumping and filtration gear.  The work crews spend most of their time in their shuttles, which work rotating shifts 24/7 until the sphere is filled with its pressurized cargo.  One shuttle and crew is always attached to the ship, monitoring gas filtration and orbital positioning while the other two are "down in the soup" collecting gas.  The SC/T has no flight avionics of its own and is actually flown from one of the docked shuttles remotely operating the various thrusters. 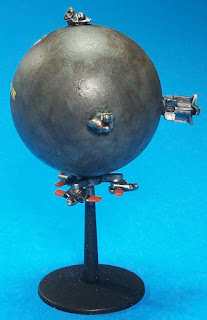 The Highlander is only minimally capable of interplanetary travel, and its low thrust requires it to maintain a high orbit over the gas giant it's currently mining.  The shuttles themselves have extremely powerful engines for their size, and given access to all the free reaction mass they can use a scooping run can be finished in well under a 24 hour period.  Modern, well built and rigorously maintained, they actually account for close to 70% of the SC/T's total value.  When one is occasionally lost due to the hazards of gas mining, the remaining crews are under standing orders to return to base rather than attempting to carry on operations with only two shuttles. 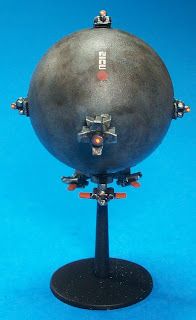 Most gas mining ops using similar vessels fly to a spaceborn refinery platform, empty their cargo, and return to the work site as fast as possible.  New Hoboken, as an interstellar backwater, lacks high-capacity refining in-system though.  Instead, they have a half a dozen of the "main hull" spheres on hand, and when one is filled they store it in orbit to await a jump-tug to carry it to market.  The control module and drive unit are "unplugged" from the sphere, the attitude jets are debonded, and the whole array is fitted to a new sphere.  The process takes only a few days during which the shuttle crews go on leave, after which the "new ship" is issued a fresh registry number and returns to work in the outer system.  Traditions (and superstitious workers) demand that the Highlander name be transferred to the new registry code. 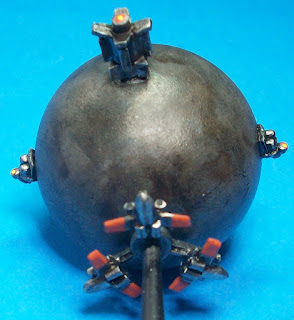 All three scoop shuttles attached?  Someone's either loafing on the jump or the Highlander is crawling to or from the work site. 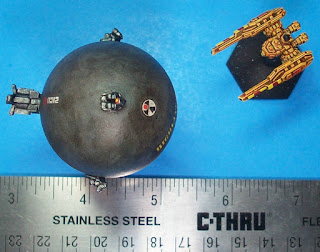 If I were that Kra'Vak destroyer I don't think I'd be getting quite that close to their prey.  Poking a hole in the Highlander when she's loaded is likely to produce some explosive results.  The compound gasses themselves aren't technically explosive, but the substances they decay into when not under extreme pressure sure are - and that's not considering the way that armored sphere will burst when compromised and spray debris everywhere.