Today's post showcases Baker's Dozen, a formation of mercenary starfighters for Silent Death.  The squadron consists of two flights of four Blood Hawk escort fighters each and a flight of four Eagle heavy strike fighters, with a fifth modified Eagle flown by Squadron Leader Thomas Baker as a flight command & coordination craft.  Baker is a multiple ace and a very dangerous man to face in a dogfight.  Outside the cockpit he's a bit of a martinet and demanding about appearances ("We are NOT the Dirty Dozen!"), an uncommon trait for a mercenary commander. 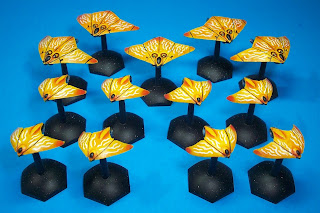 The minis are available at the metal Express web store over here:
https://silent-death.mx/store/ 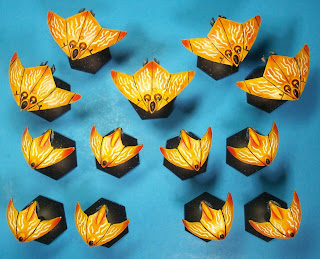 As with most Silent Death minis they're single piece castings, and come with 1" flight bases. 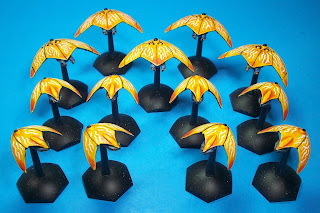 The paint scheme was inspired by the popular Terran Trade Authority books, which run toward the  bright, colorful patterns typical of Foss and Elson.  While I'm not up to their level by a long shot, I do like the way these came out. .

The undersides are done in a muted blue-gray "stormy skies" color scheme, both for contrast with the upper hull and as camo in atmospheric operations.