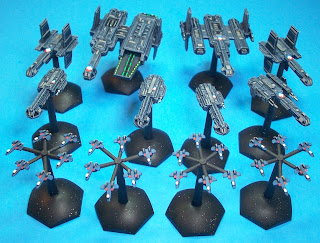 Today's post showcases Battlegroup 3.33 of the American Republic Star Navy, which operated during the Siege of Sol in the Xeno War.  Part of the Third (Expeditionary) Fleet, the 33rd is a fairly typical formation built around a battleship and carrier duo supported by several cruisers and destroyers. 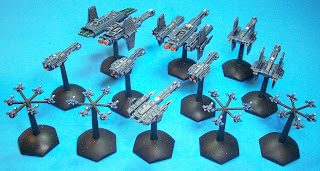 Dean's got some of the AmRep range along with a suggested Tuffleyverse background over on his FT Resource Page here:
http://fullthrust.star-ranger.com/BSBSAmRepstats.htm
This post expands on that and modifies a few of the older ships based on playtest experience.  I've done a similar paint scheme to the old lot, but tweaked a bit and with the AmRep flag on each hull.
Note that many AmRep ships use weapons (specifically pulse torpedoes) with 120 degree front firing arcs.  These aren't technically supported by the standard FT/MT/Fleet Book rules, although some fan rules sets allow for them.  If it isn't already obvious, that covers the clock face arc from 10 o'clock to 2 o'clock, and can be easily eyeballed by drawing a straight line from the center of two forward-side hex faces on the bases.
Lerchey-class Battleship 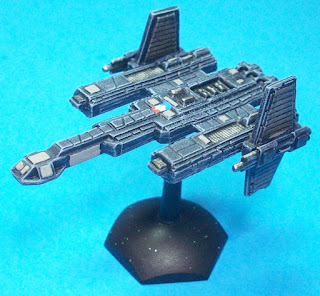 The Lerchey class was introduced as a more efficient alternative to larger capital ships, allowing the fleet to operate more individual heavy combat groups than the heavier battleships and dreadnoughts would allow.  The design was optimized for ease of construction and were being built at a remarkable pace during the height of the Xeno War.  Her heavy pulse torpedo armament is an unusual feature that actually requires broadly similar tactics to the Kra'Vak ships she most often fought against, although she lacks the phenomenal maneuverability their advanced drives grant them.. 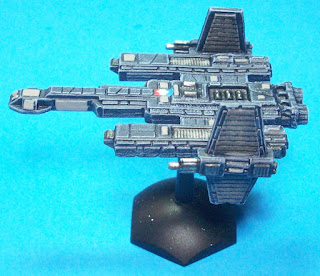 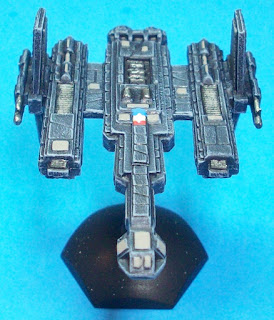 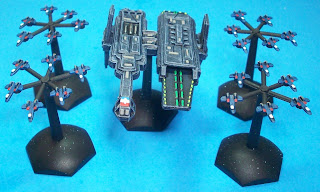 The Underwood class was developed in parallel with the Lerchey battleship design, and represents the AmRep's current construction doctrine of pairing capital-class gunships with similarly sized carrier hulls wherever possible.  Like the Lerchey, the Underwood was intended to be as low-cost and easy to construct as possible.  This lead to some radical design choices, notably the complete lack of anti-shipping weaponry that leaves the Underwood's entire offensive capability tied up in its fighter wing.  Despite this the ship is designed to operate in close support of other more conventional warships, with solid defenses and an advanced area defense array that widens her support role. 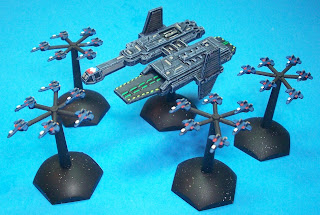 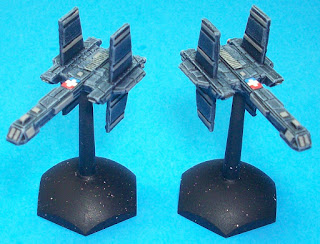 One of the few cruiser hulls in the AmRep fleet that doesn't use pulse torpedoes as primary weapons, the Baltimore is something of an anomaly.  This is due to her screen generator, which is of an unusual new design that unfortunately projects interference on a part of the spectrum that prevents the proper formation of the energy packets that make up a pulse torpedo.  It was initially hoped that the new screen would provide a defensive benefit against incoming torpedoes, but extensive field testing has failed to show this to be the case, leaving the class with an oddball weapons fit that many AmRep commanders struggle to employ well. 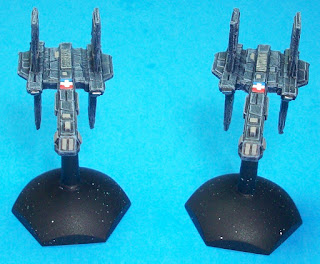 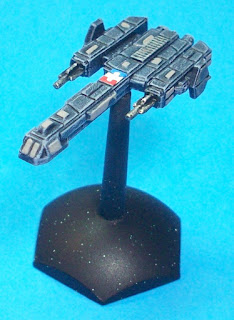 Smallest of the AmRep cruiser classes, the Proudlock is built around its twin pulse torpedo launchers.  These do give it great potential firepower, but their bulk and energy consumption also limit its ability to carry secondary weapons.  The class is most often found leading squadrons of destroyers and corvettes, acting as the glorified heavy destroyer it most closely resembles. 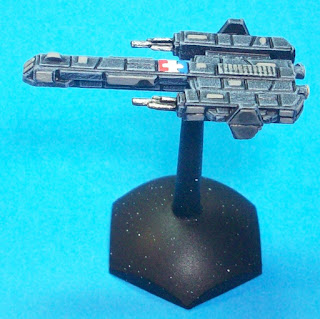 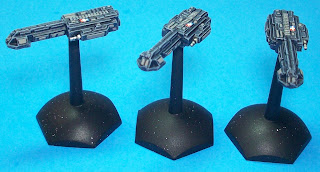 Destroyers form the backbone of most AmRep escort and strike formations, in part due to their low procurement cost and ease of construction.  Like most AmRep warships they have very limited non-combat functions, with fairly short logistical "legs" and rather cramped and uncomfortable crew accomodations despite their small personnel complement.  The Oldendorf class carries a powerful pulse torpedo as its primary weapon as well as a modest beam emitter fit. 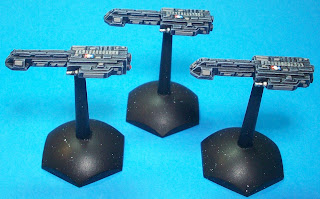 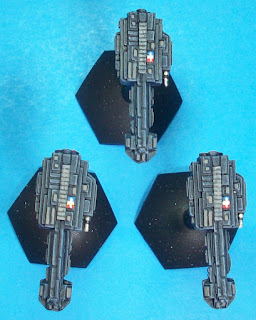