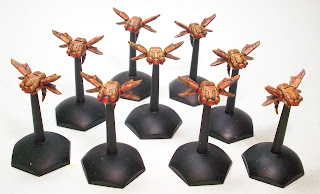 Recent project meant to be the start of a Xar battlefleet, using repurposed Gates of Antares minis since Ground Zero Games doesn't make figures for them yet.  They're sold as Ghar Flitter Drones for a 28mm ground combat scifi rules set, but I think they make very nice little starship minis and I'll probably be doing some more over time.  The GoA range in general includes a lot of grav drones of various types, many of which look like they can be cribbed for use in spaceship games. 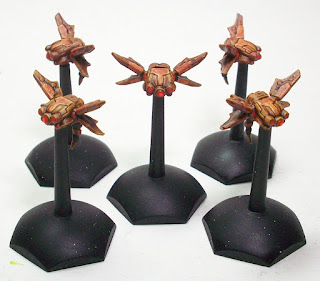 I've rated these models as "heavy corvettes" for Full Thrust purposes.  My current plan is to do the Xar fleet as rather nonstandard with a greater reliance on relatively expendable smaller ships than other stellar navies, backed up by a few larger vessels that serve as combination fighter carriers and tenders for the smaller ships.  They'll also eventually have large transports used for both military troop transport and civilian cargo hauling roles rather than the more specialized designs used by most fleets.

Of course, first I have to find minis for all these - maybe Jon Tuffley will sculpt us all a new range before then, eh?  :) 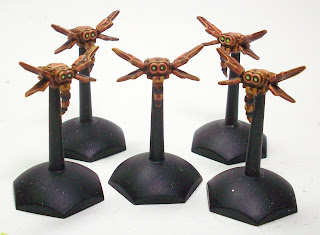 The Xar are generally built using the basic Fleet Book 1 construction rules, with the addition of a new weapon system, the Light Pulse Torpedo.

LPTs use exactly the same to-hit rolls and range bands as standard pulse torpedoes do, eg they hit on 2+ at up to 6MU range and can reach up to 30MU away with decreasing accuracy.  They ignore screens as pulse torpedoes do, but each hit scores damage as follows (roll 1d6):

For those of you who hate memorizing new charts, the damage is exactly the same as a standard beam die result plus one.  Alternately, you could look at it as a d3 rounded down, to a minimum of one.

Light pulse torpedoes are slightly less damaging than and equal mass of the standard FB1 model, but they have the advantage of giving smaller craft a less massive weapon that still ignores screens and has a very long potential range.  This is usually something only the Kra'Vak really have access to, so the lower damage output is a balancing factor.  If you find it too weak, increase damage to straight d3, although you might also want to increase the point cost a bit (perhaps to Mass x 3.5) to give a good reason to still use standard pulse torps. 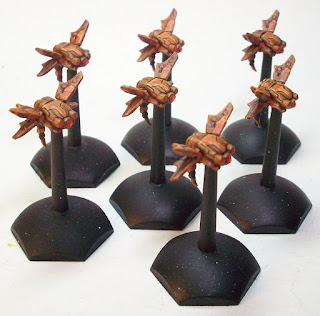 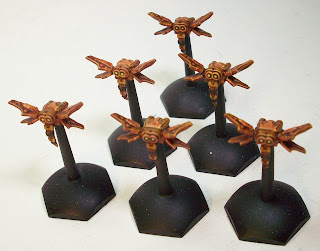 This poor Xuvaxi heavy cruiser from Irrational Designs/Studio Bergstrom is about to find out the Xar are real possessive of the letter X in their part of space. 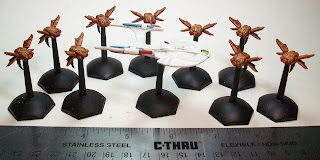